skip to main | skip to sidebar
Welcome to the blog about games, campaigns, and other cool stuff like that 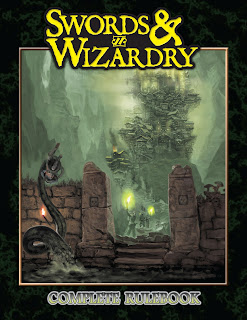 Today the somewhat mad scramble for the S&W complete rules went "live", so to speak.  100 signed and numbered hardbacks, and 200 perfect bound soft covers.  There is also a PDF version available.  Check out the Frog God Games website for more details and purchasing.

I have been reading the PDF (you get one when you purchase a dead tree book) and I am impressed.  I was worried...I thought that maybe the game would change from a looks and soul standpoint, but I can see my fears were unfounded.  It is well laid out and the art is is "old school" enough and enjoyable.  Some interesting additions to the "Core" rules as well.  I like it!

Matt Finch did some neat things with the game, and I feel it takes it to the next level for the S&W family of games.  Three versions now, from the beginning and the 3 LBB, those three books with some supplements, to right before the birth of AD&D.  Even a little homage to Holmes basic is inserted in the initiative and combat section.

He also included my play test character in the example of play in the book, along with some others, which is awesome!  My name is right there in the front of the book as well.  Pretty neat.
Posted by Fools Jest at 5:30 PM 1 comment: 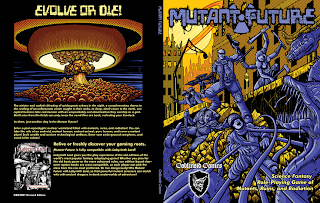 Dan Proctor announced that Mutant Future will being going into traditional distribution soon.  A face lift for the covers and some interior art.  Cosmetic changes mostly.  You can read about it Here

I like the new look!  Congrats to Goblinoid Games!

I still have yet to run a game of Mutant Future, but I have been playing in one online.  Some day soon perhaps!
Posted by Fools Jest at 10:27 PM 1 comment: 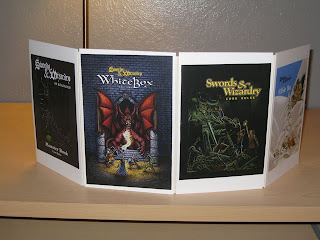 The screen is complete!  The linen tape worked very well, and when unfolded it stays put but can be adjusted.  The tables are "ok", I am not a spreadsheet master after all.  Basic stuff like to hit table and saving throw tables for monsters and PC's.  Also a movement cheat sheet and clerics turning undead. 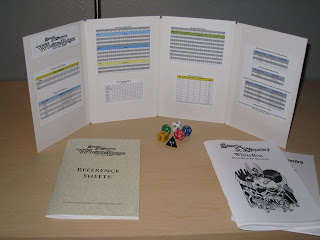 As you can see it folds down and could actually fit in the box, if I had room.  I do have the mailing box that Brave Halfling mailed the WB set in, and it works great for extra digest sized books and home made booklets. 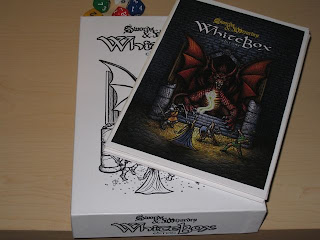 Labyrinth Lord campaign update, and an update in general

Session 11 of the campaign was played on Saturday.  The players found that returning to Larm on Hallows Eve was not as warm and welcoming as was expected.  The Main Big Bad of the current campaign sent his forces to Larm to pillage and murder.  Ghouls, goblins, hobgoblins and bugbears assaulted the town from all angles.  I used some of the ideas from the Under Siege module by Moritz and it worked pretty well.

Combat intensive for sure, but big in scale and fun.  I love ghouls as a DM!  Of course I hate them as a player.  Watching them paralyze village guards one after another, and the look on the VERY depleted players at a pack of 20 ghouls overrunning the west gate...priceless!  Several prominent NPC's died as well, much to my surprise. 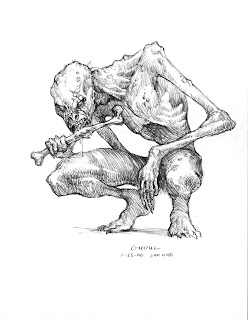 As for other notes of late, I am working on a "digest sized" DM screen for S&W Whitebox.  I am using magazine sized comic book boards cut in half, and I think I found the solution for binding them together.  Tape could work just fine, but a product called linen tape (available at stores that rhyme with Hobby Robbie) could be just the ticket.  Flexible white cloth tape.  I have yet to try to stick them together with it, but it looks promising.

I also have all but one page of tables set up for printing, and the Mullen art from several rule books for the outside.  Now if I could just figure out what to put on the fourth panel of the screen...
Posted by Fools Jest at 4:26 PM No comments: 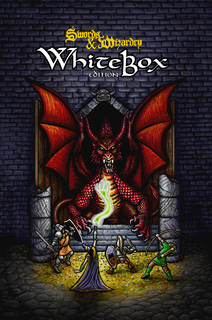 I have been thinking about S&W Whitebox edition lately.  Specifically, I was thinking of how I wish I had a face to face game of this to play in.  I still currently play in a 3.5 game (Which I have died TWICE in, and in the past 3 sessions to boot.  Who said you can't die in the new editions?) and of course I am running my LL campaign.  I also play in a couple online forum games and in a Skype AD&D\LL game as well.  Wow, that seems like a lot of gaming now that I put it down in blog land!  Of course my LL campaign is only run once a month at best (but all day).  The 3.5 game is every other week and on a very steady schedule.

Anyway, here is what I was daydreaming about.  A weeknight game, two or three times a month, for a couple hours each session, say like 6:30 to 9 or 9:30.  I think that the light rules and freedom of house ruling could make this a perfect system for this type of game.  I could see this happening at a game store, and the players would likely rotate in and out, never knowing who would be there each night.  Think of those newfangled 4e "D&D Encounters", but with a sandbox game of OD&D\S&W WB goodness.  Awesome, right?

The kicker is that I do not want to run it or organize it.  :)  So it is most likely just me day dreaming, as I doubt I will find anyone local doing anything OSR like.  Too bad I am no where near Jimm from The Contemptible Cube of Quazar.  His Skull Mountain game sounds like just the thing I am looking for.   Good on you Jimm for running it.  I am sure there are some appreciative players there in Austin.
Posted by Fools Jest at 11:23 AM 2 comments:

For session 10, we have an excerpt from the Book of Judgments and Guilt, from Thaxon's most holy cleric, Edward Oakenshaft.  These are believed to be notes taken during that last expedition to the Tower of Mouths.

For some silly reason our sneaky little git Anferney really needed to find out what was in the door in the sewers.....he REALLY needed to know. (which I found out more later why,  will get to that).  I was rudely disturbed while studying the teachings of Thaxon by the before mentioned sneaky git asked me for money.  I did not ask why I just gave some money to get him out of my hair so I could finish my studies.  He comes back from what ever he was doing and this is where the excitement starts.  THE DOOR I HAVE TO GO TO THE DOOR! We picked up some new group of hands to help with the heavy lifting.  Mitt and Mu two competing brothers, and an incompetent fella Oaks.  We headed for the nasty sewers.... We got through them with no issues other than the stink to the door.  I was kinda nice I did not have to listen to Edgar whining about being dirty! Oh yeah we had some robe wearing sally that was a hostile to me and the ways of Thaxon until he witnessed one party member almost get cut in half and the light of Thaxon healing his wounds.

The mage did his magic stuff and the door did what a door does…opened.  We climbed up into the hole.  I was severely thumped by a slimy gooey thing (By the light of Thaxon I hate those things.) then that same slimy thing turned, and well Oakes did not last long (RIP Oakes the Oracle).  We continued to work our way and killing the unjust through the bowels of the Tower of Mouths.   Then we found this Rock…so what does one of our group do?  Pick it up of course.  Well the damn thing started talking to everyone.  It started to chatter its blasphemy to me and well the rock = Hamoan (or something like that) and that did not = Thaxon so I told it to shut it and I put it in my pack and we continue on.  At this point I found out why Anferney needed to figure out the door and what was inside it.

While using my money to get in trouble Anferney found himself in a situation he could not get out of.  Not knowing what to do he prayed to Thaxon for help and was delivered from his woes but was compelled to find out what was going on in the tower of mouths.  After I found this out, I was all about smiting this unholy place.

We continued on and found some zombified freako that Mitt with the use of a potion of some kind that controlled this abomination to find the summoning room of some ritual that was well needed to be stopped and destroyed.  So we followed this nasty critter….my hammer blazing looking to do some judging…  to the room and found a leg coming out of a wall and a half rock half stone infidel that was looking for a hammer to the side of it head.  So that silly mage guy Orin Stormycloud (or something like that) started flinging spells out of this little wand of his and created a cloud that stunk and jacked you up if you were in it.  Just ask Mu.  I attempted to with the light of Thaxon to turn the evil critter with no success.  I ran into the fray excited for some smiting of evil.  The dead squishy side of the nasty thing looked to be dead but the stone side was swinging away.  Thinking to myself hammer on stone = damage.  So I started swinging.  I landed some shots he landed one shot I was wavering.  Then the hammer struck and the stone crumbled to the ground and the light and truth of Thaxon brought me through the fight.  Mu and I were almost ready to fall; I walked over to Mu grabbed his shoulder and concentrated and focus my full belief in Thaxon and the power of Thaxon healing power pulsed through Mu and I and we looked like we had not been touched.  Then this silly thing started to come alive in the middle of the room…some rock dude form some other existence started to form and asked why did you summon me, I do not want to be here.  Mu said then go home, it said ok and poof gone.

Oh yeah the rock we put it down busted it up with my hammer and threw it down the poop hole in the sewer.

So the moral of the story is; if Anferney comes and asks you for money, say NO!
Posted by Fools Jest at 10:42 AM No comments:

James over at Grognardia posed the question today of when you think of Dungeons and Dragons, what cover comes to mind?

Easy.  For me its Otis.  Cover of my favorite version of the best game ever invented. 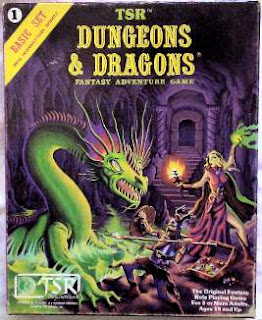 Join or be flayed 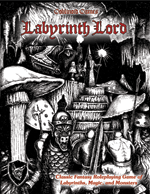